December 2021 – Kinetic Arts Center’s pre-professional circus performers, CIRCUS SPIRE, invite you to join them as the boundaries between their art and athletic excellence overlap with competitive-style sporting games in their 2022’s production of Circus Forte! 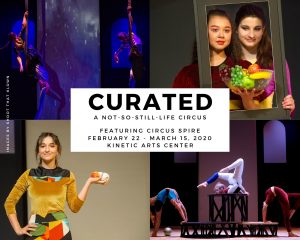 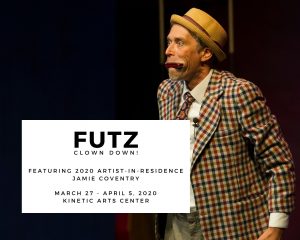 Nov 2015 – KALW.ORG|BY CHRIS HAMBRICK Sights and Sounds on KALW – weekly guide to the Bay Area arts scene through the eyes and ears of local artists. http://kalw.org/post/sights-sounds-weekly-121015#stream/0

“Despite that rather dark premise, and the show’s inventively dirty costumes and destroyed-world set, Salvage is an uplifting show — a testament to resilience of the human spirit, and especially, to the jaw-dropping abilities of the human body, displayed here by eight extraordinarily talented performers.” Mark Rudio, A BEAST IN A JUNGLE, December 5, 2015

A BEAST IN A JUNGLE

Nov 2015 – FROM KQED’S THE DO LIST -“Yet in their dramatic, new production, Circus Beyond the Ring and the Kinetic Arts Center in Oakland seek to defy the art form’s usual focus on the flighty and fancy-free, opting instead to present visions of survivors on the precipice of calamity, fighting to prevent themselves from tumbling into the abyss.” – Chloe Veltman, KQED The Do List, Nov 9, 2015

Nov 2015 – Cy Musikar: “And I’m shouting it out for ‘Salvage’ — a little punk circus show at Kinetic Arts in West Oakland with exceptional acrobatics and clowning that runs throughDec 20.”  KQED’s The Do List, Nov 19, 2015

http://ww2.kqed.org/arts/2015/11/19/cy-and-davids-picks-lucero-body-music-disgraced-and-more/ to hear the complete podcast.

We were recently featured in BayAreaforSale.com See the full Article HERE My 11 year old daughter has been training with Coach Jaron Hollander on static trapeze for over a year. She is a member of the youth performance troupe. The entire program is awesome! She is a type 1 diabetic and the focus on strength, safety, performance, fun and entertainment has only made her a stronger person. Adult programs too. Check it out!!

I have to pass on to the high school students who performed at the EBI fundraiser a couple of weeks ago at the Claremont that they were over the top magnificent! They were professional, interesting, and amazingly skillful. Kudos to them – really impressive. As a musician, I know that being “background” entertainment can be particularly difficult.”

What a great time! We just saw the show “Inversion: A Disobedient Circus” at the Kinetic Arts Center. The all tween and teen troupe wowed the audience with daring kinetic and entertaining circus acts — climbing/spinning/hanging from ropes, straps, hoops, trapeze, and “tissue”; crazy group juggling; flips/rolls/group and solo balancing/hand stands/contortion; and fun comedic episodes woven in. The art director obviously had a good eye and good feel — the visuals from make-up to sets t… END_OF_DOCUMENT_TOKEN_TO_BE_REPLACED

Emily’s Sunday 5-6:30 aerial  circuit class is fantastic!  For the past year Emily’s class has been my sip of sanity before my work week begins.  Our work out both challenges me physically, and allows me to feel accomplished.  It is always engaging as we use a wide variety of equipment: rope, tissue, trapeze, Pilates balls, Thera-bands, agility boards.  In addition to physical challenges, we do a lot of core strengthening work.  Our work together is so inspiring, that I often wake up e… END_OF_DOCUMENT_TOKEN_TO_BE_REPLACED

I love them!!! they have been fantastic when it comes to fun and exercise for my son. they have the biggest patience and the best understanding of the ups and downs of young boys. But best of all, the Thursday morning Pilate’s class with Emily has built up my stamina, reconnected me with my core, in a fun jovial and never over top manner. Emily is completely understanding of bodily limitations and yet will provide you with enough support to slowly reconnect with that part of you that you thou… END_OF_DOCUMENT_TOKEN_TO_BE_REPLACED

My five-year-old daughter does their after-school Circus Kids class on Wednesdays and absolutely *loves* it.   Her instructor, Slater, is not just knowledgeable about circus arts but can masterfully deal with the meltdowns that inevitably come with working with small children.  He teaches the kids real circus skills AND self-care, such as reminding them to drink water at regular intervals.  I am completely impressed with him, and the rest of the staff are very friendly and professional as wel… END_OF_DOCUMENT_TOKEN_TO_BE_REPLACED

There are several awesome things about this place. One is that they have kids classes concurrent with adult classes. YES! Gone are the days when I have to either follow my kid around during class or sit on my ass being bored. My 2.5 yr old loves his classes with Slater and I get a good circus-y workout with Jaron. A great space, good location with parking and they have a great variety of classes including flexibility and yoga.

I want a community  – for me and my kids — where we can exercise our bodies, hearts and souls.  This place is just plain warm – with laughter, love and the flush of exercise.

Loved this place! I had never done this before so wasn’t sure what to expect, I had a great time!  I took the mixed aerial arts class, it was very well structured, they pay a lot of attention to safety and form, they teach you how to do it right the first time! The atmosphere is very welcoming, professional and FUN! Easy to find and they have parking.

Our 7 year old has been taking circus classes here for a couple of months and I can not say enough good about the place!  The teachers (in our case Slater and Gina) are fun, funny, kind, attentive and also have as much energy as the kids!

Photos by Shoot That Klown